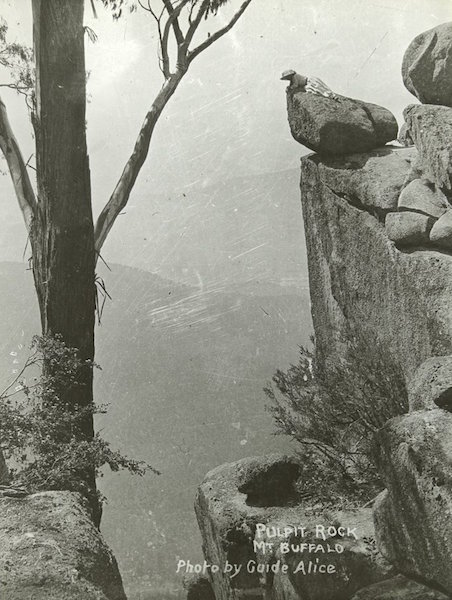 “A strange, romantic life … full of adventure and humour, the charm of wild places and creatures, and moving incident” (Barrett, 1924).

An Elopement, Pursued by Father

Alice’s father, James Manfield, had first come to the Buckland Valley with his brother John, looking for gold in the 1850s. In 1854 they climbed Mt Buffalo, along the spur later known as Goldie Spur (Wilkinson, 1929) and later conducted miners to the top of the mountain at first searching for gold, later to enjoy the scenery and cooler climate (Catrice,  1999, Family Origins, Manfield site, see refs below).

James, “a bronzed and bearded Englishman” travelled to other goldfields and in 1860, aged thirty, in a diggings near Mount Kosciusko, he met Jane Robinson Simpson, in her late teens (Family Origins site).

“It was a case of love at first sight. … The miner and the young milliner eloped on foot and by coach to Cooma, pursued by Jane’s father who was stopped by a snow fall. William reluctantly agreed to the match and the wedding took place with the usual festivities” (Family Origins).

James and Jane eventually returned to the Buckland Valley and began farming land at “Nailsea”, named after James’s birthplace in Somerset, England.

Alice was born in 1878, the ninth of their eleven children.

In 1889-90 James and Jane Manfield built The Buffalo Falls Temperance Hotel (later called Buffalo House) near the township today known as Porepunkah. It was located at the junction of the roads to Bright and the Buckland Valley (see Vines and Lumsden, 2002).

The Manfields were among the pioneers of tourism on Mount Buffalo. James and his sons took guests on camping trips up the mountain, on tracks passable only by pack horse and foot.

“They camped out; they went to The Hump, The Horn, The Gorge, and to some of the other wonderful places on the mountain” (Wilkinson, 1929). 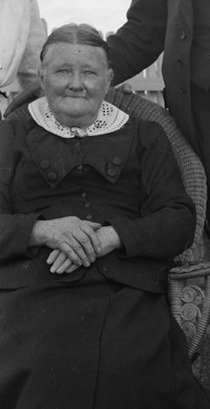 Alice’s mother, Jane was said to be the first woman to ascend the highest point on the Mt Buffalo Plateau (Family Origins Simpson page).

“The stillness of the mountain seemed to take hold of me”

As soon as she was old enough, Alice joined the guiding trips and from the first moment, she loved the mountain.

‘… mountain climbing and the stillness of the mountain top seemed to take hold of me” (Diary entry, quoted in Hoy, 1965).

After that, she would accompany her brothers at every opportunity.

“As a child, she made friends with wild nature in the hills, and early wanderings made her familiar with lonely places” (Barrett, 1924).

Some time in the 1890s, Alice became a mountain guide in her own right. She became familiar with all the caves and waterfalls and led people safely around the plateau, despite the lack of marked paths.

“People from the Government chalet joined us — they appeared to be at a loss as to how to get about, and were glad to avail themselves of the courtesy of Miss Manfield, although they had not patronised her guest house” (J. McKellar, Toorak, Letters to The Age, 1 August 1936).

Alice was “a fine horsewoman” and “a daring and skilful climber” (Barrett, 1924).

“Guide Alice who is well known to tourists on Mount Buffalo, is not only an efficient alpine guide, familiar with every pinnacle and peak of that portion of the Australian Alps, but a lover and observer of nature” (The Argus, 1924).

The Manfields also had chalets on top of the mountain. These were tiny buildings of basic slab-hut construction. One was situated in the area that is now car park below the Chalet.

“Memories of a holiday spent in the Manfield Chalet twenty-three years ago … Guide Alice knew the countryside thoroughly and our romantic minds were bursting with questions. But she never failed under the barrage of questioning and badinage” (J. McKellar, Toorak, Letters to The Age, 1 August 1936).

Alice was an accomplished naturalist. She knew the names of all the mountain’s plants and animals and could imitate bird calls (Mathews, 2016). In 1924 she published a booklet titled The Lyrebirds of Mount Buffalo.

This had seven photographs of lyrebirds including some rare ones of the male lyrebird in full display.  It was a subject widely acknowledged to be very difficult to capture on film (The Argus, 1924). In fact, this could be the first such photograph ever taken.

The way Alice acquired these photographs shows her patience, intelligence and her deep affinity with nature. To photograph the mother and chick she first had to “win the birds’ friendship”.

“She had failed to secure photographs by hiding near the nest, so, morning and evening on several successive days, she sat on a rock, in full view, and accustomed the wary birds to her presence; and always she mimicked the mournful notes of the Boobook Owl, “ Mo-poke.” This plan at last succeeded: a photograph of the hen bird was secured” (from Alice’s notes in Manfield, 1924).

Capturing the male in display was another matter.

“The full-plumed male is a very shy subject, and enthusiasts like Mr Tregellas and others have with infinite patience laboured for years without being able to get the bird in full dress” (The Argus).

To photograph the male in full display, Guide Alice concealed herself in a hollow tree trunk and attracted him with the Mopoke call. Of course the camera technology of the time did not have the quick manoeuvrability that it has today. Alice kept her camera focussed on a spot frequented by the bird.

“He advanced, curious but still cautious, breast-high through the undergrowth, and was “snapped” the moment he came within range” (Alice’s notes in Manfield, 1924).

Alice was an enthusiastic photographer, interested in many subjects. The State Library of Victoria has a collection of her work digitised and available online.  There are shots of children and people in gardens or in front of shops, cars and roads. Of course there are many photographs of mountain landscapes.

There are walkers and skiers, and images of her guiding guests enjoying the wild places.

Alice would spend many nights alone in “Granny’s House”, the hut on top of the mountain, subject to all the extremes of mountain weather including bushfires and snow. On one occasion, the snow was eight feet deep and access was only via the chimney (Parks Victoria, 2010).

“In a log hut, perched high on Mount Buffalo, like an eagle’s eyrie, the Alpine Girl Guide spent many days and nights, alone. It was no rare happening for the little dwelling to tremble in the stress of storm— wind and whirling snow. But it was stoutly built, and the girl it sheltered was unafraid. She has never developed “nerves,” you see; and to be alone in a hut on a mountaintop, during a snowstorm, was nothing remarkable — for a maid of the Alps” (Barrett, 1924).

Alice was a woman of astonishing courage. She was admired for her strength, her love of the wild, her broad and intimate knowledge of the mountain and her many accomplishments. But today, as possibly in her own day, she is also famous for her clothes.

Alice began guiding in an era when women went to the mountains in full-length skirts.

Because her guiding involved hard physical work, scrambling over rocks and walking on steep rough paths, Alice designed herself a ‘trouser suit’ and had it made up by a tailor in Melbourne. The outfit included jodhpurs, a strong buttoned jacket, and puttees  (strips of cloth wound around the calves). Her boots though sturdy, can be seen to have a raised heel.

Women’s groups criticised the costume, saying she was ‘spoiling’ herself by adopting masculine attire (Hoy, 1965).

But Alice was popular, and an attraction in her own right.

“Mrs Manfield senior had a place near Bent’s Lookout, and her son, James S Manfield, junior had a small place near the tennis courts. These had to be got rid of, and so the Government gave Mr James Manfield the right to erect a cottage near Reed’s Lookout and they gave Mrs Manfield the right to erect the bungalow which was later destroyed by fire. This is how those two houses came to be on the north side of the Gorge” (Wilkinson, 1929, p14).

James Manfield died in a horse and cart accident on 8 September 1910 near Rutherglen, in Victoria. He was buried in Bright Cemetery, Victoria. Alice and her mother took over the running of Buffalo House.

Alice married John Edmund Manfield, a distant cousin, in 1917. They had one daughter, Genevieve.

Alice retired from guiding in the 1930s.

Barrett, Charles (1924), “Introduction” in The Lyrebirds of Mount Buffalo. See Manfield below.

Catrice, Daniel (1999), “The Garden of the Gods: A Brief History of Mount Buffalo National Park”. http://www.visitmountbuffalo.com.au/index.php?p=1_130

Hoy, Edith E. (1965), Historiette of the Manfields who began their Mt. Buffalo Saga when the Buckland was at its heyday in the early 50’s. Harrietville, Vic: Harrietville Historical Society.

Wilkinson, J. F. (1929), “The Romance of Mount Buffalo: an abridged transcript of an address given at The Chalet”. Printed in 1942 in Melbourne, Vic: Publicity and Tourist Services, Victorian Railways.