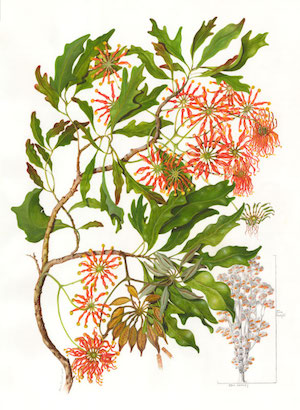 Albury’s Florilegium  is a collection of 41 botanical paintings by local artists, representing plants from our Botanical Gardens.

A florilegium is “a collection of paintings of plants, drawn from life and depicted with botanical accuracy. This centuries old tradition is generally used to create an archival collection of rare and exotic plants. Over the past few years … there has been a new awakening of interest in florilegia that record collections of plants … from within a particular garden.” (Christine Cansfield-Smith 2012, p12).

The images in this post can be seen on the Albury Collection webpages and in the book, Albury Botanic Gardens (2012), by David Lawrence, available at the Albury LibraryMuseum. The artists also exhibit in galleries from time to time.

The Albury Florilegium was created as the result of an idea from Beechworth artist, Christine Cansfield-Smith and her brother, David Lawrence, who is a Visiting Fellow at the Australian National University and also a Beechworth resident. In 2006, Christine and David founded the Beechworth Institute of Botanical Art, running workshops in the Kiosk at Mayday Hills. In 2007 they moved these to the Wooragee Hall. At the time Christine and David were both working in Canberra (Christine at the CSIRO, David at ANU), as well as running weekend workshops there. But on around ten weekends a year, they would drive to Beechworth on a Friday night, run the workshop and return on Sunday.

Some of the participants started from scratch, learning how to draw cones and balls and how to use watercolour. Others were more experienced artists. Christine Stewart from the Wooragee area helped with the teaching, and occasionally teachers were brought in from Melbourne and Sydney.

“The Wooragee Hall is wonderful and still used regularly, as the group now meet on the first Wednesday of the month and the 3rd Saturday just to paint and mingle.” (Christine Cansfield-Smith)

As a result of this huge commitment in time and energy, in 2009 David and Christine came up with the idea of co-operating with the Albury Botanic Gardens to create a florilegium for the Gardens’ plants. They thought that having a project would encourage the painters to refine their talents. David’s book, Albury Botanic Gardens provides historical context for the florilegium.

Artists were given a suggested list of plants, many of which were chosen for their historical significance. They studied the plants in the gardens, taking photographs and notes, often returning to observe the plants’ full annual cycles. Paul Scannell, the then curator of the Albury Botanic Gardens, provided advice and specimens and the Friends of the Gardens assisted with “generosity, passion and enthusiasm” (Scannell, 2012, p10).

“We discovered just how many plants studied and painted were endemic to the Murray region.” Christine Cansfield-Smith on Murray Arts website.

“It’s very detailed work. You draw from the specimen. You have to sit on the ground, get your legs out of the way, and look really closely.” Artist Moira Russell.

Where allowed, the artists took samples of leaves, flowers or fruits home.

“It takes many, many hours to complete a painting, as it is very detailed. Christine was always ready and willing to give advice when needed. It was very rewarding work, especially when we eventually had finished and the works were shown in the library museum.” Artist Marie Van Lint.

Marie Van Lint is a Lavington artist who finds botanical art enjoyable and engrossing. She would like to paint every day but doesn’t manage this, except when she is trying to get a project finished. With the Beechworth Botanical Art Group, Marie has recently exhibited in the GIGS Gallery on the causeway.  She has also participated in exhibitions in Sydney, Melbourne and Canberra.

“One of my favourite works was the Strelitzia nicolai (Great White Bird of Paradise). Not many people notice this flower in the gardens, as it is right up high at the top, and as the grand sized foliage plant grows to about 10 metres high, it is very hard to see.” Marie Van Lint.

Moira Russell lives in Corowa. She was painting family paintings in oils before she joined the group. Now Moira estimates she has created around a hundred botanical paintings, many of which appear in the David Lawrence book.

Moira has a particular interest in native orchids.

“I absolutely love native orchids. Dad used to take us through the Chiltern Forest and teach us all the names.” Moira Russell.

For the florilegium, Moira painted the Crimson Spider Orchid. Because this is endangered, and the location of the Albury plants is kept secret, Moira had to draw and paint from photographs. She studied its root system with the aid of illustrations in her “bible”, Orchids of Australia, by W.H. Nicholls. Her painting features in another post on this site.